The whispers of God and the wrestling with God often leave a permanent mark.  On our souls, on our hearts, and sometimes even on our flesh.October 13, 2013 was truly the most beautiful day I could ever imagine. It was the day David and I were married. The weather was perfect… mid-seventies and overcast. Right as we were saying our vows to one another, the sun pierced through the clouds and shone down on us and an eagle circled above us and flew overhead. Our wedding guests couldn’t stop commenting on it. Four years later, we still hear stories about how moving this moment was for our witnesses present on that day. We knew Holy Spirit was present with us on our wedding day, and we knew He would be with us always throughout our marriage. We had mountains of faith declaring His goodness. 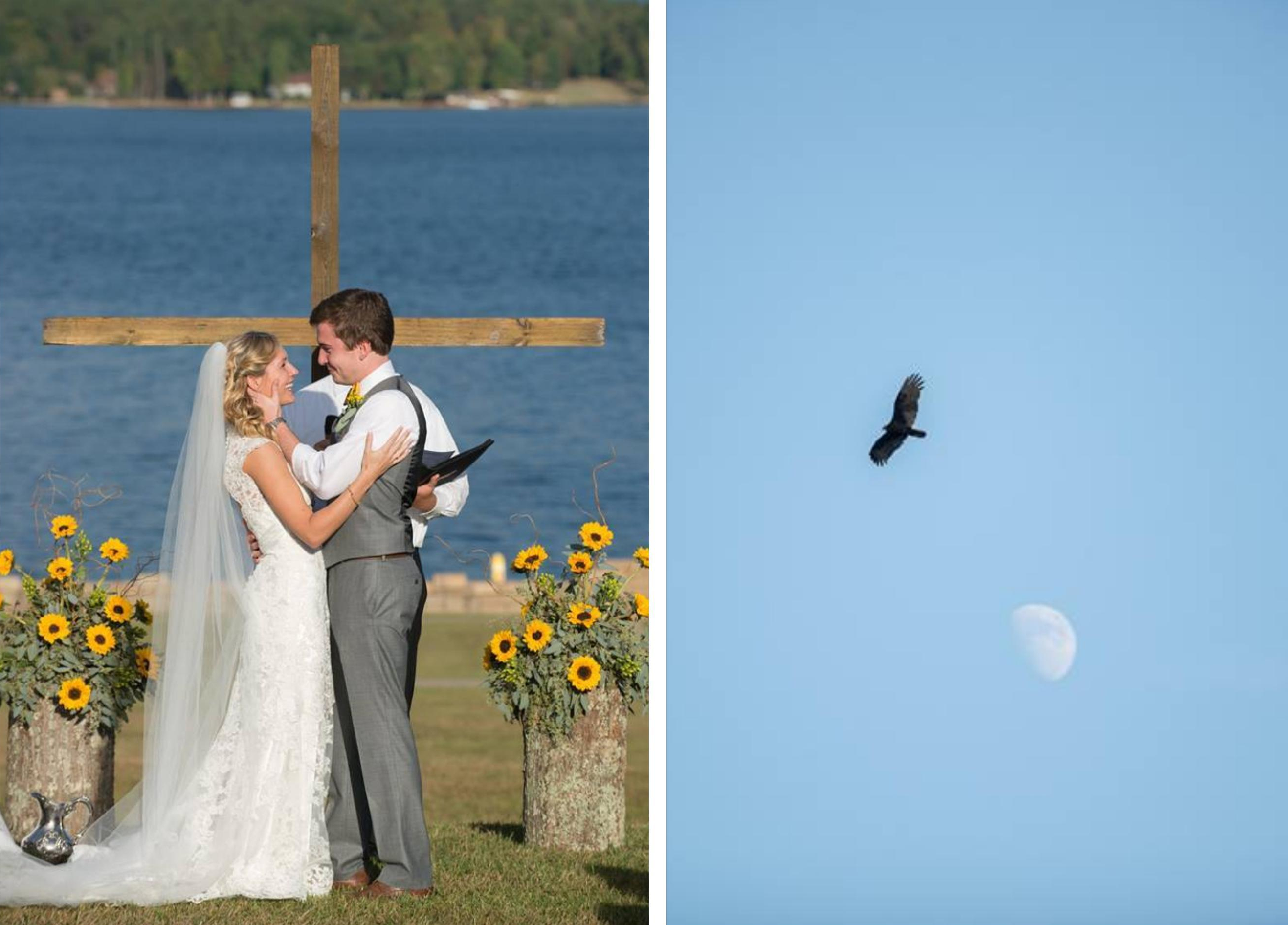 Six short months later, we stepped into the darkness and the desert of a three-and-a-half year wrestling match with God as we endured our first of  seven recurrent pregnancy losses. Our faith was tested and we began to question His goodness and doubt His love for us.

My younger brother, Michael, used to wrestle in high school. I remember going to watch his wrestling matches and feeling vicariously exhausted just watching the struggle and tension on the mat between two athletes as it seemed to go on for hours. Even though each round only lasted a couple of minutes, time passed so slowly in the midst of so much struggle and tension. I can’t imagine what this must have been like for Jacob to wrestle with God, not for six minutes, but for six hours or more until daybreak the next day. That wrestling match must have felt like an eternity of tension and exhaustion.

Some days the wrestling in our story literally knocks the wind out of us to the point where we don’t even know how or if we can breathe again. After our most recent miscarriage in April, our team of doctors put us on the “kitchen sink” protocol to try again in the fall. At this point they still had no idea what is going on in my body to cause the miscarriages, so they decided to throw every treatment option there was at me and see if it would help. We spent nearly six months preparing my body for pregnancy medically, nutritionally, emotionally, and spiritually. We fully believed with all our hearts this season of barrenness, infertility, and miscarriage was over, and we were confident we were entering into a new season of harvest this fall. When the official pregnancy test at the doctor’s office came back negative earlier this week, it felt like a punch in the gut. This was the last option medicine had for us. This was our year of hope. This was our year of harvest. The Lord was supposed to be redeeming, rewriting, and restoring our story. We bought a glider earlier this year for our nursery we were starting in faith. We hung an ornament on our Christmas tree containing the names of the baby/babies we were praying to see embroidered on a stocking on our mantle by next Christmas.  My body and spirit were ready, but the seed still didn’t grow.

Disappointment like this feels like a wrecking ball pummeling into your life, your hopes, and your dreams. It becomes difficult to imagine your circumstances ever changing when you’ve been in the middle of a seemingly unending desert for years and years. When I got the phone call from the doctor’s office earlier this week, it was devastating. David came home early from work and we both ugly cried in the nursery for a long while. Ugly cried. I eventually left the nursery to go take a shower, and all I could do was just sit in the shower on the floor and just weep and weep for over an hour until all the hot water in our house literally ran out. Feeling disappointment like this over and over again hurts so incredibly much. Somehow, though, in the midst of grief and disappointment I felt the whisper of the Lord in His tenderness in the middle of my brokenness. Even in the desert when everything seems hopeless and it’s easy to despair, our Father is always with us.

Ironically enough, six-and-a-half years ago I hiked 30 kilometers through an actual desert carrying a physical pack of burdens on my back (and yes… I also had a weave and micro braids… but water was scarce and it was just easier to not have to worry about washing your hair in Africa, Ok?). 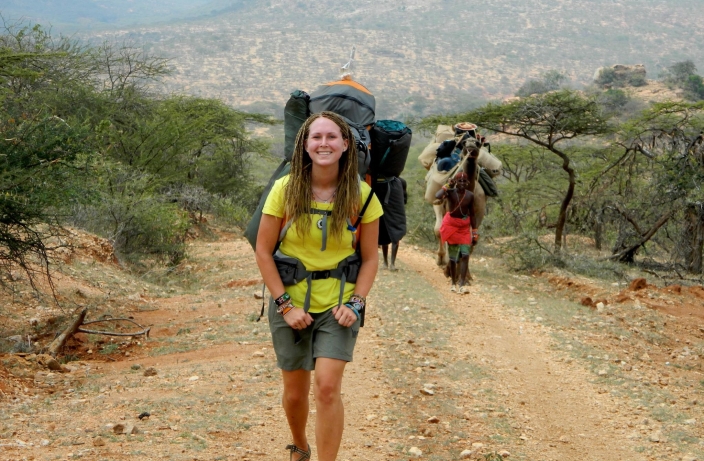 On the day this picture was taken in 2011, I wasn’t prepared for the literal journey through the desert I was taking. In this picture, my smile was super fake. I was miserable when this picture was taken. I was wearing a brand new pair of Chacos that hadn’t been broken in yet (hello, blisters), my pack wasn’t weighted properly (hello, backache), and I was worried about where in the world I would use the bathroom in the middle of the desert so I thought denying my body water would be a great idea (not a great idea… I almost passed out from dehydration). I remember feeling exhaustion I’ve never felt before and literally wondering if we were ever going to get out of the sun and to our destination. One of my teammates brought the Chronicles of Narnia with her for the trip, and I had been reading through the series for the first time. A three word phrase from the book came to my mind in the midst of my feelings of turmoil and exhaustion, “Courage, dear heart…”

As I was sitting in the shower earlier this week letting all the hot water pour out over me in my brokenness, I felt the Lord’s whisper.. “Courage, dear heart.” This phrase comes from the book, The Voyage of the Dawn Treader, Chapter 12 in the Chronicles of Narnia series written by C.S. Lewis. The context is this:

Lucy, one of the main characters in the series, and some of the others are on a ship heading into dark, unknown waters. Everyone on board is scared and worried that Aslan, the great Lion in the series representing Jesus, had led them in the wrong direction. The rowers say, “We shall never get out, never get out, He’s steering us wrong. We’re going round and round in circles. We shall never get out.” Everything is covered in pitch black darkness at this point in the story. Lucy is afraid and whispers, “Aslan, Aslan, if ever you loved us at all, send us help now.” C.S. Lewis writes, “The darkness did not grow any less, but she began to feel a little—a very, very little—better.”

Shortly after, though the darkness did not grow any less, a small beam of light appears and an albatross circles overhead and begins to fly slowly ahead of them. Everyone on board takes this as a sign of guidance and they begin to steer the ship to follow the albatross. C.S. Lewis writes, “But no one except Lucy knew that as it circled the mast it had whispered to her, “Courage, dear heart,” and the voice, she felt sure, was Aslan’s, and with the voice a delicious smell breathed in her face. In a few moments the darkness turned into a greyness ahead, and then, almost before they dared to begin hoping, they had shot out into the sunlight and were in the warm, blue world again. And all at once everybody realized that there was nothing to be afraid of and never had been. They blinked their eyes and looked about them. The brightness of the ship herself astonished them: they had half expected to find that the darkness would cling to the white and the green and the gold in the form of some grime or scum. And then first one, and then another, began laughing.”

This part of the book resonates with my spirit in so many ways. The last three-and-a-half years have seemed so dark and so full of uncertainties and unknowns as we’ve tried to navigate the waters of recurrent miscarriage. I have questioned God more times than I can count in the midst of confusion, fear, grief, and unimaginable pain. But when I think about the albatross flying ahead of the Dawn Treader and the beam of light piercing through the darkness in the story, I am reminded of the sun piercing through the clouds and the eagle flying over David and I as we said our vows. Even though there is still darkness all around us right now in this season of recurrent pregnancy loss and infertility, I can hear the Father’s tender whisper, “Courage, dear heart”, in the midst of our fear and brokenness. I want to always be like Lucy, on the lookout for the whisper of my Father even in the midst of fear and uncertainty. She was the only one aboard the Dawn Treader who heard the whisper of His voice.

In that moment as I was sitting and crying on the floor in the shower, I still felt incredible amounts of pain and disappointment. But I did begin to feel, as C.S. Lewis describes, “a little—a very, very little—better.” The tender whisper and call to have courage is a steep one. It is not easily grasped. It isn’t a feeling. Courage is a choice. Courage is still trusting, still hoping, and still believing even when your circumstances do not change.

It takes courage to cling for dear life to the tiny thread of hope you have left.

It takes courage to continue to pray and ask God for healing.

It takes courage to speak truth into your own heart and speak against the lies.

It takes courage to believe beauty will rise from the ashes of disappointment.

It takes courage to trust Him without borders.

It takes courage to continue to believe harvest is coming when all you see is barrenness.

It takes courage to seek Him in the waiting.

It takes courage to wrestle with Him and refuse to let go until He blesses you.

It takes courage to believe He is still the God of miracles when yours hasn’t come yet.

It takes courage to continue singing until the miracle comes.

It takes courage to fix your eyes on Jesus, and not the miracle.

It takes courage to continue believing, hoping, and trusting even when your circumstances are unchanging.